One of this weekends activities was playing golf. Wife was never that athletic but has taken to a number of my passions easily. So we picked up a new set of clubs for her to learn the game on and set out for the course. I’ve pushed her in the past to attempt 18 holes but I think having to use an older set of clubs and then a set that was too short just beat her up too much. With some online instruction on stance and grip that I just couldn’t quite convey to her she began to pick up the basics a little more and was bummed when we finished 9…so we paid the re-round and hit another 9…it was a good day. 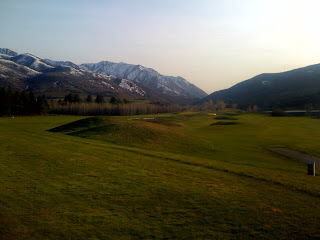 Look at that view…how could be anything but a good day.

As if to move good into better we hit one of our old time favorites. It’s a little dive restaurant named Su Casa that serves some excellent Mexican food (Americanized though it may be). The absolute best is their nacho’s…Covered in melted cheese 1/2″ thick and dripping with grease… 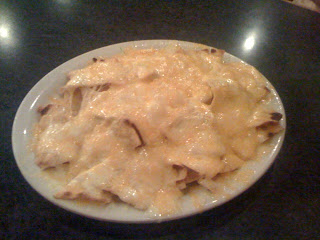 As Martha would say…It’s a good thing
Posted by What the Fetch at 12:27 AM