Schuyler Fisk: From Where I’m Standing


A great folkish song by Schuyler Fisk. Take a look at her website and listen to the 4 or 5 songs she’s got up there…worth your time…would I lie to you?

Wife and I saw her open for Kenny Wayne Shepherd last summer in Utah and really liked her. The video is from the local PC tv station and the audio isn’t great, but you’ll get the picture.
Posted by What the Fetch at 8:52 PM No comments:

I haven’t really posted anything in a few days because I’ve been avoiding as much real thought as possible. It seems that the recession is finally hitting me in the work place. The one thing I’ve never been able to really handle about being a manager is having to cut someones hours. Don’t get me wrong, I don’t have any issue with cutting someone loose due to performance or the lack there of. But when I have to cut someone back due to the lack of business that’s where I run into trouble. I just have trouble looking at someone and having to explain that your position is no more…sorry…
Thankfully I have only ever run into that position a few times, but every time is just as difficult as the first. I’m telling someone that hasn’t done anything wrong, that is in good standing with the company and by all accounts shouldn’t be in that situation that as of X date you’re no longer receiving a pay check…
Maybe it’s tougher this time because it’s all of 3 days before Christmas…maybe…probably not…

Posted by What the Fetch at 8:49 PM No comments:

The final production of my latest cabinetry job came down to the wire, ultimately finishing a day before I had to load it into the trailer and head to northern Utah to install. This was two weekends ago now and it still seems like I’m wearing off the stress of making sure we finished and installed it in time to meet our contract.

Not having had a commissioned job in the last year it was a little nerve racking trying to make sure that I have everything I needed to do the job. Needless to say Wife and I still had to hit Home Depot for a few items I forgot. The job still went pretty smooth and the install came out awesome, better than I had expected actually. I had been having doubts about the over all design of the flat screen tv frames matching the room (after all I hadn’t really spent anytime in the room since last year). Thankfully everything matched and they really completed the room. They really gave the room a finished look and warmth that hadn’t been there before. 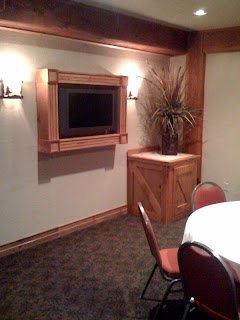 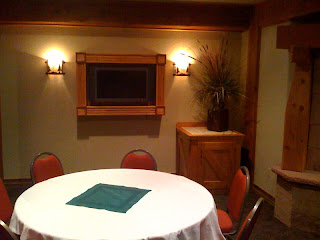 There’s another frame that matches this one on another wall in the same room…double the pleasure..
Everything was produced in Knotty Alder to match the casings and base board of the room. Not bad if I do say so myself.
Posted by What the Fetch at 8:46 PM No comments:

Tonight is the night I fell asleep at the wheel

Posted by What the Fetch at 8:45 PM No comments:

With the impending end of the free world as we know it, I’ve been wondering what’s in store for the flashy veneer that the 21st century? Will less money translate into the resurgence of real toys for kids? Children once again playing football in the streets, building tree houses and riding their bikes? Will this spell the doom of the ipod, xbox and playstation? Or have these items become so ingrained as the norm that there’s no dethroning them from their pedestal?

Ultimately what I’m driving at here is, what in the hell happened to Charlie Brown? I remember the olden days of the 80’s growing up and watching the happy Christmas special 3 or 4 times before Christmas. Now you’re lucky if you get to see it once. Have we really changed so much that a simple story with timeless characters (with an overly christian theme, but I can look past that) have become passe or politically incorrect? Is the message about Christmas being about the small things, friends, family and time together really that bad?

Well hopefully the turn in the economy will help us realign some of our values and push our kids outside to play in the snow on Christmas rather than plunk them in front of the TV with that new xbox…besides…it’s my turn, so go outside and play in the snow for awhile, I’ve got an alien overlord to blast with my laser cannon!

Posted by What the Fetch at 8:44 PM No comments:

Almost a year ago I made the jump to an iPhone. As I was completing my order online I went through all the cases and screen protectors in an attempt to keep my new investment safe. Then jumped in the voice of reason (I like to call it Wife)…you don’t need that, it’s like another $60.00 and for a $400.00 phone that’s just too much. Here look at this video by PC World. They dropped it like 10 time on the concrete, scratched it with a key and nothing happened…it’ll be fine without the case etc.

I will admit that after viewing the video I too believed that I wouldn’t need those protections either. I even dropped the phone getting out of my truck at the gas station and watched it pinball around the concrete and gas pump like 4 times before it came to a rest. This resulted in nothing more than a few scratches on the chrome trim ring. Alright I thought, this thing really can take a beating. Well, that was until karma decided to give me a bitch slap across the iPhone. It seems that at Thanksgiving my brother pulled out his new 3G and low and behold it was tightly packaged in all the protective casing and scratch proof covers like a new born little baby. I scoffed…you don’t need all that crap, look at mine, it’s nearly a year old, been dropped on the concrete at least a dozen times and been in my pocket non stop since the day I bought it. True it shows a little wear, but nothing more than an average cell phone would be showing at this age.
Bitch Slap O Rama baby…

Not even a week after uttering these words I find myself getting out of the truck like any other day, keys and iPhone in hand. Well that day was not just any other day, it was the day that Karma came creeping up my driveway and helped me drop my iPhone once again onto the concrete. The difference however was that that day the planets were perfectly aligned, the wind speed and shear was just right and karma was on their side. So as my phone tumbled to the ground it landed perfectly upside down, directly on its screen. Oh Shit! that’s not going to be good. I bent over and picked it up and what do my eyes see?

This: Warning, those of you with a weak constitution should look away…just look away 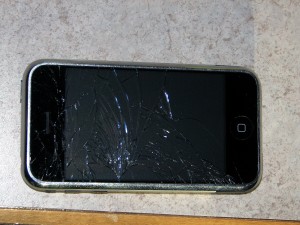 The real bummer is that I also opted out of the insurance plan…it’s tough, what do I need that for? After all the only thing that’s going to kill it is dropping it in water and the insurance doesn’t cover that…SHA RIGHT!
Needless to say, I will be insuring the new 3G that replaces this one and wrapping it up like a little new born and coddling it everywhere I go…no no…don’t touch…it’s sleeping…we just look at it, not poke it.
Oh well…life goes on, I guess…
Posted by What the Fetch at 8:42 PM No comments:

Last week before I left for Turkey day I hoped onto the Adult Swim web site to play one of their mindless games in an attempt to wind down a little. It had been awhile since I had last logged on and played “5 minutes to kill“, so I thought I’d see what else was available. “Amateur surgeon” caught my eye as I scrolled through things and thought what the hell. Maybe it was because it was listed under the “twitchy games” but still, what the hell. This game rocked. It’s poor story line, awesome sound effects and grizzly nature seemed to appeal to every sense I was trying to appease at the moment. So now a week or two later I find myself returning to it again and again…it has some strange hold on me. Maybe I should have become a doctor…hmmmm???
Posted by What the Fetch at 8:41 PM No comments: