The latest production from Weezer

I mean really…who doesn’t love all the cameo’s in this? It’s up there next to the South Park spoof of all the YouTube stars
Posted by What the Fetch at 12:34 AM No comments:

I know that a few weeks ago I promised that I would be updating the site regularly each week. I actually followed through with that for a while but have recently fallen short. For those of you that read regularly I apologize and for those of you who just found the site…well don’t take the few weeks absence as a trend.

I just seem to have fallen into a rut of sorts lately. Work is slowing down, the weather is HOT and Wife is still not here full time…More importantly the house still has not sold.

We’ve resorted to the time tested practice of burying St. Joseph in an effort to speed the sale along. On Tuesday we set him head first into a small hole next to the real estate sign. In the 4 days since, we’ve had 1 chance meeting with an investor looking for an investment property and then last night we had a showing from a realtor that I never expected. So I’ve got faith that by the time that Wife plans on coming down to start her new job in mid June that we’ll have an offer on the table and we’ll be able to get on with life. Now that’s a novel idea.
Posted by What the Fetch at 12:33 AM No comments:

So last week when Wife was down for her Birthday we decided to play as much golf as our pocket book could handle. I’ve been meaning to head up to the Ledges Golf Club for a while now but haven’t really had the excuse until now (especially since my place of employment exclusively books all our golf packages with them…did I get a discount? Noooooo….they’re too uppity for that and no my opinion of the course wouldn’t change had the round been free). 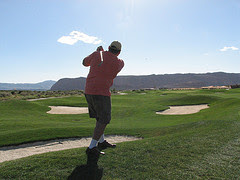 There were a couple of problems with this however.

1: we picked a day that the wind was blowing from the North at like Mach 3.

2: the front 9 is laid out so that when the wind is blowing from the North you will either have your flesh removed from your bones due to the sand blast effect from the surrounding sand dunes, or more likely your ball with travel at least half the distance it normally does but then make a complete u turn and hit you in the head.

3: the course REALLY isn’t worth the price.

4: the course is clearly laid out to facilitate a land rape of multi-million dollar homes and not for the sheer design of the course as you’d find in the great courses across the world.

Wife thinks I’m being a little harsh here, but with so many course choices in and around St. George you would think that the club would have made a better use of land and topography when laying out the front 9 in order to give the course something to stand out with.

They have deemed the front 9 as a competition grade narrow course blah blah blah…what this really translated into was that the fairways were so jammed together that while standing on the Tee you wondered if you were going to slice and hit the guys on the opposing Tee coming right back at you. I have seriously played city courses that weren’t as jammed together as this front 9. Holes 1, 2 & 9 all within a poor shot and a law suit of each other. Holes 3, 4, & 5 are the exact same. Holes 7 & 8? Yup you guessed it exactly as the others. The other shame is that every one of these holes was strait as an arrow…in order to make up for this the design team clearly decided to make each green a fun house putt putt challenge with rolls, dips and troughs the like that I have only seen at the amusement park.

The back 9 seems like a complete after thought when it is compared to the front 9…or is it the other way around? Either way the back 9 had a large number of redeeming values. The fairways had some challenge to them and followed the topography of the surroundings and were far more than a bull dozed piece of land unlike the front 9. The HUGE draw back to the back 9? This is where the utter and complete rape of land is evident. Rather than continue with the theme of the course in following the lay of the land, AND the spectacular views of Snow Canyon State Park, they decided their real money lay in setting aside those areas for the multi-million dollar homes. Plain and simple it’s sad. Rather than allow the course to become one of the greats out there they took the lessor road and routed the course away from the views and topography so that half a dozen of rich bastards could rape the land.

So as I said above…the course is not worth the $110 prime rate nor the $60 twilight rate that I paid. The staff in the club house was arrogant and demeaning and the service was sub par. The only redeeming staff presence was the range director that gave me the lay of the land before teeing off on #1 and the bag girl who was genuinely interested in how our game was on the way back to the car.

So for those average Joe’s out there that have to work for their money my suggestion is not to waste your time or your cash. Take it to one of the other local courses and play 3 rounds instead…you’ll be glad that you did.
Posted by What the Fetch at 12:32 AM No comments:

On Friday I officially hit the 90 day mark of what I am now lovingly referring to as my incarceration. It has been a miserable 90 days without Wife. I hate to even go here but I just can’t contain it any longer.

When we started this experiment we had high hopes and rose colored glasses of when our house was going to sell and when we’d once again be back together. 90 days later and things are just as they were but now with a loving tinge of tiredness and longing. It’s even coming to the thought of maybe I’ve made the wrong decision and that our life really is North in the mountains rather than here in the desert. I know that if I were to ask, my old job would be given to me with open arms…and that my friends is tough. It’s tough knowing that the new adventure you’ve set out upon has a safety net. So now that things are getting tough and the wheels have met the road it’s so easy to look back on the life I’ve left behind and wonder if it was a mistake.
My new job is wonderful, it’s exciting and different. It allows me to express myself and my talents, something that wasn’t fully appreciated with my old position. But without my wife and a life of our own together is all of this really worth the pain and suffering. I know that in the long run things will work out for the best and that we’ll be able to get back to a normal life, but it’s the thought that this could drag on for another 90 days that makes me cringe.

We have made an attempt to speed the process and dropped the price of our house nearly 11K. Now if we could just get the heavens to part and the skies to open up and that person that’s meant to buy it would just find their way to us we could all get on with our lives. I do have to say that the media isn’t helping our cause. The housing market bubble in Utah hasn’t really burst yet and things are still moving. But with each negative report and word of a recession, people are scared and those that should get into a 1st house now are too afraid to do it. Come on people, it’s now or never. Grow some back bone and take the plunge, it’s the best thing you could ever do. So please… BUY MY HOUSE!
Posted by What the Fetch at 12:31 AM No comments:

Who doesn’t love a little meat? No one, that’s who!


Ok so I think I need to post a disclaimer here: This video is not about Brittany Spears’ crotch shot. It does however poke fun at it and who doesn’t love that? No one, that’s who!
Posted by What the Fetch at 12:30 AM No comments: