As you can tell from my last post the wife and I are together for a brief weekend again. We spent as much time away from the house and out exploring new and old places to eat and be. One of the new places that we’ve thought about trying in the past was the California Pizza Kitchen. Sure it’s a corporate America raping the little guy for what is basically $0.50 of dough and sauce but hey…I’m an American and know just like everyone else how to bend over and take it up the rear so lay off…Anyway it was surprisingly good. We went in with lower expectations and realistically were looking for a beer in a predominantly uber Mormon neighborhood and when I say uber Mormon I mean UBER NAZI MORMON. This county is known to force businesses to close their doors to customers on Sunday to enforce the Mormon churches belief of not doing business on Sunday, that’s how UBER Mormon they are. But I digress… 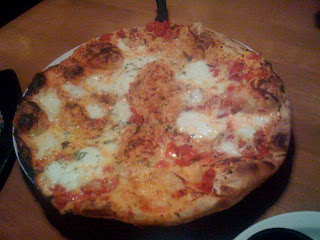 The food was actually better than surprisingly good it was excellent. We ordered the Four Cheese Neapolitan and it was thin, crispy and damn good.

The other bonus to the meal was the beer and bendy straws. Ever drink beer with a bendy straw? You should try it, it’s deliciously childish and fun. I took a swig through the straw and was immediately whisked back to my childhood and was blowing bubbles in my chocolate milk. I think my mother must have known that this is how I would turn out if I continued that practice. 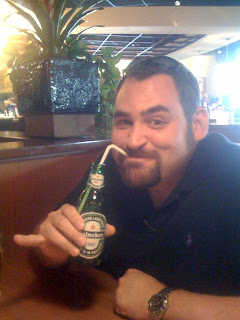 So here’s a warning to all you UBER MORMON NATZI’S let your kids blow their bubbles or they’ll end up in a respectable restaurant drinking beer through a straw…at least I remembered that I was in public (notice the pinky etiquette) and politely sipped…I’m not a total pig you know.

The best part was this. I think we’re perfect for each other… 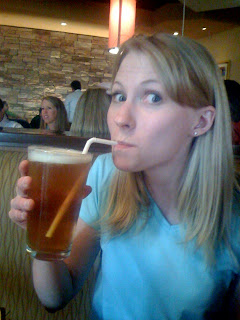