Here I thought I had married into a stressful crazy family, I have a feeling that my brother has me beat. The weekend, a little strange at times was none the less pretty sweet. Wife and I have a number of pictures that I’m sure we’ll post eventually…lots of white people that can’t dance…and a few that can.

It was nice to be able to travel through some country that Wife has never been through before and see some new and interesting places. The first of which was Navajo bridge South of Lee’s ferry and pretty much the starting point of the Grand Canyon. Coming across the valley from the West gives a pretty interesting effect of these large dark ridges that appear to be rising in the desert when in actuality they’re falling to the bottom of the canyon. What’s funny is that the first picture I took of the area wasn’t of the beauty around us, no that would be what a non crazy person would do. I instead took a picture of the men’s room…that’s right…the men’s room at the little rest area just before you cross the bridge. Wait wait, I’m not a total perv…I was the only one in there and I’m not in the picture so chill. The reason I took the picture is that when in a facility such as this I prefer a little privacy…However I don’t think those that built it felt the same. 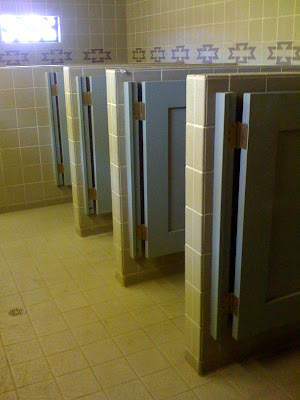 Count the tiles on the wall my friends, because those are 6 inch tiles which puts these stall dividers at just shy of 4 feet tall. I don’t know about you but at 6′2″ I have a problem with walking in to a men’s room and seeing anyone coping a squat…just not my cup of tea. Thankfully it was deserted and I was able to pee in peace without anyone eyeballing me from the next stall.
The area wasn’t without it’s upside however… 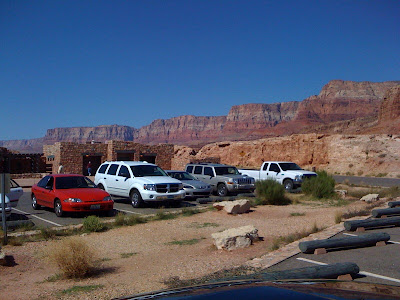 The views were pretty amazing….

As I mentioned the weekend was pretty good. Our hotel sucked and had oooozed Bates Motel from every orifice it could. I don’t think I got more than 20-30 minutes of sleep at one time due to the jet engine they had installed in the wall and called an air conditioner. IT SUCKED! and that’s the only way to put it. Every other room in the area had nice quiet units that whispered cool air into the rooms like a baby’s sigh, but ours was like world war 3 had erupted every 30 minutes. It would explode into life like an atom bomb going off, whine like a jet engine for the next 10-15 minutes and then turn itself off with another gigantic explosion. IT SUCKED! did I already mention that…well I just want you to get the gravity of the situation. The only thing that kept me from going insane in the middle of the night and not murdering Wife in her sleep was the impromptu mini bar we constructed. 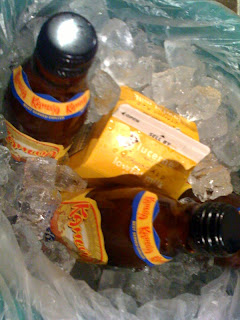 Oh Kahlua…how many marriages have you saved? Between you and waffles the world is a better place.
Posted by What the Fetch at 12:54 AM